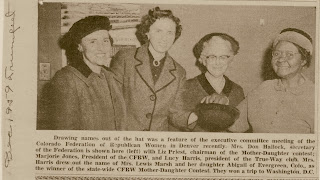 From the December 1959 Trumpet
Drawing for the Mother-Daughter contest.
Winner was Mrs. Lewis Marsh and her daughter Abigail of Evergreen.
They won a free trip toWashington, D.C.
(Click on article to enlarge) 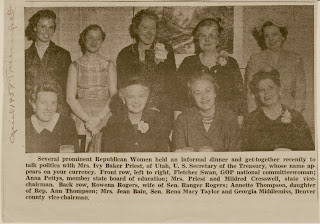 Dinner with Ivy Baker Priest, of Utah, U.S. Secretary of the Treasury
(Click on article to enlarge)
Posted by western lady at 12:33 PM No comments: 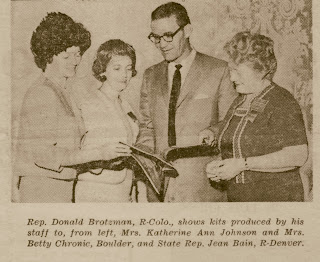 
(Click on picture to enlarge)
Posted by western lady at 12:07 PM No comments: 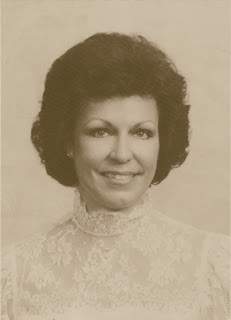 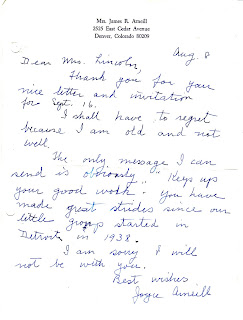 Response from Mrs. Arniell to invitation from President Jeannine Lincoln
Posted by western lady at 11:47 AM No comments: 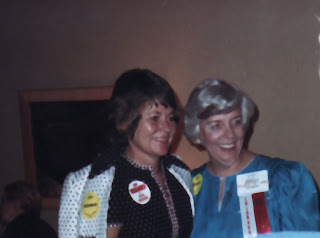 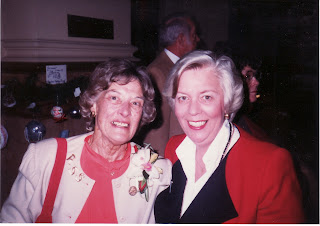 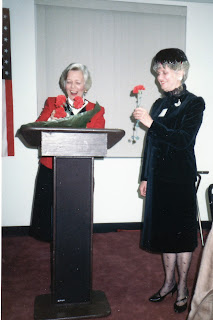 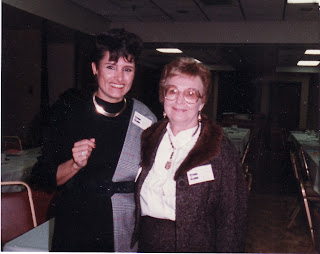 August 16, 2003 - Living Legends, Honoring our Living Past Presidents of CFRW

Living Legends
Honoring Our Living Past Presidents of CFRW
State Convention at Durango on August 16, 2003
Betty M. Chronic
CFRW Historian
Living legends are those people who have had a lasting effect on others. Tonight we honor CFRW living legends, our past presidents who are still with us. Sometimes only from a distance as they've moved on.
1.   Betty Higby, Colorado Springs. 1957 - 58. Betty is sophisticated, organized and was president during the Rush to the Rockies centennial, hence the First Ladies Centennial Doll project. She was later State GOP Vice Chairman and Director of the US Mint in Denver. WE also know her as John Love's mentor. Very smart politician!
2.   Middy Haver Divelbiss, Pueblo 1968 - 69. Middy is tall, quiet and effective. The club chronicle project for recording club histories was adopted. CFRW rented space at GOP State Headquarters. Membership was 4,508 in 60 unit clubs. Middy now lives in Colorado Springs. Her laugh and work with the arts are fondly remembered.
3.   Judy LaMora Hughes, Colorado Springs 1974 - 75. Tiny, super charged, and mischievous, she knew how to organize and gain recognition for CFRW. The first Day at the Legislature was held and a special committee for Women in Government (WIG) was formed. CFRW made contributions to NFRW, State GOP, and College Republicans. Judy served as NFRW President and became the 3rd Coloradoan to be NFRW president. She also served in the first Bush administration and is now living in Austin, Texas.
4.   Virginia Sweigert, Grand Junction 1979 - 81.  Taking over as President upon the death of Mary Lane, Virginia served as President while suffering lung cancer. Her determination and courage helped her recover. CFRW developed a slide presentation and approved a logo for CFRW. CFRW hosted the NFRW convention in 1980. We believe she now lives in Florida.
5.   Jeannine Lincoln, Parker 1982 - 85. Jeannine is a striking presence with a strong sense of history and process. Her two terms saw congressional reapportionment, a state wide polling project, sponsorship of TARS, and creation of a CFRW pin, Jennine was a strong presence in NFRW and later wrote an updated CFRW history for our 50th anniversary. The first CFRW Handbook was printed as was the first CFRW platform. CFRW raised money for the Ruth Stockton stained glass window in the State Senate at the Capitol.
6.   Judy Broadway, Englewood 1986 - 87. With a delightful southern accent, Judy kept CFRW moving. A historical calendar was printed. Jeannine's updated CFRW history was published as CFRW celebrated it's 50th year. CFRW scholarships and campaign activities were a focus. CFRW was one of the first 5 states to send our membership on computer to NFRW.
7.   R.J. Doria, Colorado Springs 1988 - 89. RJ was the first Colorado member to attend the NFRW polling school and she used that training when she became president to help us become more effective in campaigns. CFRW held its first fundraising dinner before the state assembly with Jeanne Kirkpatrick as our honoree.  We are told R.J. now resides in Salt Lake City.
8.   Jacque Stafford, Grand Junction 1992 - 93. Blond and smooth spoken, her exterior hid a sharp political mind with a little audacity thrown in. We took over the Governor's Mansion for a fund raiser with a Democrat governor in residence. We celebrated 100 years of Women's Suffrage and created the Roamin Romer project to expose his varied political stances as he traveled the state.
9.   Judi Rupp, Canon City 1994 - 95. Judi's smile lights up a room, demonstrating her warm and inclusive nature. But organized and astute she is. CFRW celebrated the 100th anniversary of women voting in Colorado and election of the first three Republican women at the legislature (House). Judi worked effectively at campaigning and in fostering unity between the party and the federation.
10.  Carol Singer, Aurora 1996 - 97. CFRW was having a financial crisis because of increased costs of printing so printing of Tusk Talk had to be suspended. Carol is a business woman and put that knowledge to work, keeping CFRW solvent. CFRW held a birthday luncheon for Linda Campbell, held the No Ball Ball fundraiser, a raffle to choose a king with deputy Treasurer David Solin winning. We stayed solvent.
11.  Gaye Scherz, Loveland 1998 - 99. Another southern accent with ambition and a desire to serve CFRW. Gaye lost her husband and carried out her responsibilities for CFRW with strength and dignity. Norma Anderson became the first woman majority leader in the House. A Fundraiser of collecting pennies was initiated. A CFRW video was produced and 85,650 hours of campaign activity were provided by our members.
12.  Carole Brown, Glenwood Springs 2000-2001. Carole has spent her life involved in politics. She understands the importance of a national federation and brought CFRW clear information on national politics. The new community service project "Welfare to Work" was begun. Membership increased to over 2,000 again.
Posted by western lady at 8:08 PM No comments:

The Republican Women's Doll Collection continues to be the most popular exhibit in the State Capitol. Our brief bulletin, prepared by Edie Carroll and distributed by the Tour Guides to visitors, explains the history of this collection.

This past spring we were delighted to be contacted by Pat Hoffman, who identified herself as the granddaughter of Governor and Mrs. Albert McIntyre (1895-1897). In turn, her granddaughter had viewed our exhibit with her schoolmates and expressed dismay that the doll representing her great-great-grandmother was not dressed as she had always believed she should be. Mrs. Hoffman then offered to dress a doll in as accurate a gown as she could make. The result was a beautifully dressed doll representing Mrs. McIntyre.

Mrs. Jeannine Lincoln accepted the lovely doll for the CFRW in a small ceremony attended by Mrs. Hoffman, her daughter, four granddaughters, Paula Lincoln and Jerry Millie. The group then attended a luncheon for Mrs. Hoffman at the Broadway Grill.

Publicity for this event appeared in the Trumpet and the Colorado Statesman.

western lady
Lieutenant Dwight D. Eisenhower, aged 25, married Mamie Doud, aged 19, on July 1, 1916, at the home of the bride's parents in Denver, Colorado. Following the wedding, performed by Reverend Williamson of the Central Presbyterian Church in Denver, the newlyweds honeymooned a couple days at Eldorado Springs, Colorado a resort near Denver, and then visited the groom's parents in Abilene before settling into the lieutenant's crude living quarters at Fort Sam Houston.